Running long(ish) distances is usually the most enjoyable in a scenic landscape. Trail running and ultra running are almost synonymous and most races advertise themselves by promising the most pristine landscape and the best view.

Last weekend’s race did not. It was actually very much to the contrary one of the most monotonous competitions I have been to. I even knew beforehand it would be and still signed up. Why? Because I wanted to try it.

This race has the set time of 6 hours and the length of the course is a loop of 930 m. So there is no reason in going faster to finish earlier. The challenge is to keep going for 6 hours, until the race is over. Loop after loop after loop. Round and round.

This seems pretty freaky and borderline insane and after having finished I can confirm this and say that it’s probably not my kind of thing. But nonetheless it was an interesting experience and I would definitely recommend trying it.

Kilometer 0 to 10: As the starting pistol goes off everybody starts to run, jog or walk in their own pace. I’m often very nervous when a race starts, something that can be negative but also increases my adrenaline and makes me super excited. But today I don’t feel anything of that excitement or race-motivation. This just feels like a slow jog close to where I live, because that’s exactly what it is. I go really slow, take off some clothes as it gets warmer, listen to a podcast and have my diligent crew (Gustav) hand me some tea after every loop. After an hour I’m already so bored and can’t stop looking at the big clock on the nearby train station.

Kilometer 10 to 21,1: After my first 10 km I realized that I wasn’t really trying hard at all and I got the motivation to actually run a bit faster. It felt good and I started to think that I was in a good position to try a reasonably timed half marathon. So I kept my pace up and did round after round…

Not being used to running on asphalt, my ankles started to hurt. I usually run in the forest, on smaller trails or at least on a gravel road. No uphill or downhill, just asphalt and right turns. It’s not me against the next mountain, it’s just me against my discomfort. I told myself that I would take a longer break once I had completed the half marathon.

Break: I sat down (yes, we brought our own garden chair), took off my shoes, changed into a dry shirt, put my phone to charge (the battery is not what it used to be) and decided to have some lunch. It’s a classic mistake to try something new on race day and still I had done it. I bought sushi from a newly opened take-away and it tasted sour and horrible. So I gave up on my original lunch plan and just had some salty crackers, apple mash, a fruit bar and drank a lot of tea and water. My helpful crew Gustav gave me a leg massage with a cooling gel and changed my timing chip to another pair of shoes. I took this break without stressing or looking at the clock at all and felt like new when I started over after around 40 minutes.

Kilometer 21 to 37: My legs were quite stiff but I felt rested and fresh. I started with a couple of loops walking to not upset my stomach after having eaten. I jogged some rounds, talked to some other runners, walked a round with Gustav and tried to always have an eye on my hydration. Now the time started to pass by faster and more people came to cheer for the runners, including some of my friends that would come over for a barbecue after the race. That definitely helped me to raise my motivation. 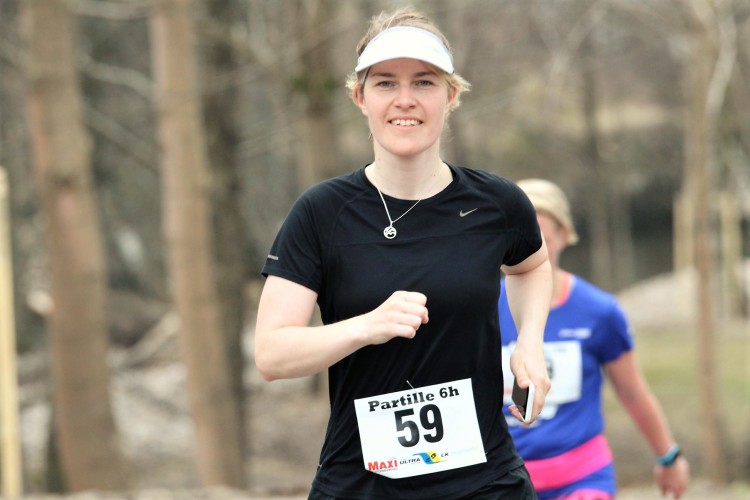 Although my feet and legs felt better after I had changed my shoes and compression socks, the pain came slowly back and I was really not thinking to get myself injured on this kind of race. So I stayed away from running at a faster pace and hitting the pavement even harder. After 39 loops and almost 6 hours I decided that I had enough and handed in my timing chip. It was quite nice to sit down and have a chat with my friends while some other runners tried to squeeze out the last drop of energy during the last minutes of the race. In the end the winners (both female and male) would have completed over 70 km (!). I finished at 37,4 km on my Strava, which is 12 km longer than my previous longest distance. 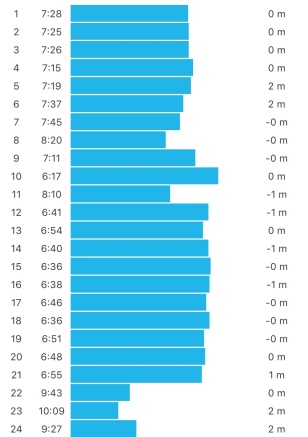 So while I felt that I should have completed a marathon and that it would have been possible, I’m still happy with my run and the confidence it gave me for slightly longer distances. Now I know that I’m not tired and exhausted after almost 40 km. I just have to keep my pace easy, eat and drink enough and don’t get my pulse up too high.

I’m not planning to do any more of these road races and much less running loops, but now I’m looking forward to the summer with beautiful and challenging hikes and runs in the mountains!